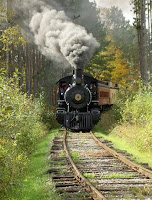 Many have written about train journeys. Most complimentary, some not so complimentary. Yet the writing continues. And now I take up the pen, or rather the key board. I hope I do my predecessors justice.

There is something about a train that fascinates the male mind (my apologies to the remaining half of the human population, since I have no evidence to the contrary I will have to surmise that you are not fascinated by trains). Maybe its the sense of power it radiates. The sheer sight of the engine making its way to the platform is itself awe inspiring. The huffs and puffs, the screech of the brakes, the loud hawking of the vendors, the mechanized voice of the announcer, the babble of confused voices shouting aloud a thousand goodbyes, take cares and see yous all make for a very potent cocktail.

And once on the train, the real fun begins. There is a wild rush for the window seat. And usually a great shout when the train begins to move. The luggage is secured. The train begins to gather speed and the landscape whips past you. The peculiar rocking motion of the train is another reason. Everyone brings out food packets and no one knows whose hand is where. Finally, the eating all done, the group separates in differing activities. Some begin to play cards, some make a furtive trip to the bathroom to smoke and down a drink. Some tipplers are a inventive lot. They buy a large soft drink bottle, preferably pepsi or coke owing to their dark colour. They dump half the stuff and add liquor to it. And they comfortably take a sip out of it openly. To all unsuspecting eyes they are enjoying a soft drink.

Others bring out cards and soon there is a big crowd around them. Till the Ticket Examiner comes. As soon as he leaves, the game is on again. A few take out books, novels and bury their noses in them. And then there are those who just look out the window. Like me.

The swift breeze generated by the furious pace of the train blows on your face. Your windswept hair brushed back by its force. Somehow the train's motion makes me feel at peace. And now the tracks curve and necks crane out to catch a glimpse of the engine puffing away. It seems amazing that that solitary engine can pull all these compartments. You wonder at the driver and all those people who are working to ensure the safe passage of the train. Sometimes you look inside the compartment and try to guess who each passenger may be. So many different faces, different thoughts. It seems a tableau of life.

Sometimes life too seems to be a train journey. We meet so many people on the way, past friends and acquaintances, future friends and acquaintances, well wishers, people who wish we were in a well, so on. People get off, get on. This is one train journey where all get to be drivers and passengers at the same time. There are those who grumble at the tardiness of the train or the unkemptness, some who do not like the their co passengers, some looking very anxious, some looking down and out, some full of life and having the time of their life, some quiet and some relaxed. Yet it is a journey one must necessarily take. If at all for the reason that you will never get a chance on it again. 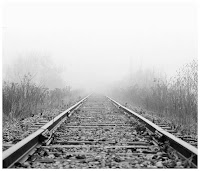