As you sow, so you shall reap 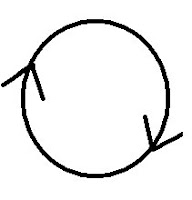 Life sure is a circle. What you sow, you shall reap. Boy, they sure were not kidding when they thought up that adage. I have stated this earlier, I will state this again. Being a teacher sometimes exposes me to what is probably the entire list of characters to have crossed the Shakespearean stage right where I work. From the heroic to the downright comic, they are all here. Just a few short months ago, they were rejoicing in their "triumph." Now, they are running hither and thither, looking for shelter, with so called best buddies betraying each other.
For those who haven't a clue as to what I am talking about, let me fill you in.
Early July 2008. The students of the college I work in wrought mayhem protesting against the Principal. They held him responsible for their dismal performance in the University exams. College property worth lakhs were destroyed. The College management bowed to the pressure of the students. The Principal in question was removed. Old procedures for awarding marks were reinstated. How the students celebrated their "victory"! Obviously they had not heard of Churchill, leave alone his maxim, "In victory, magnanimity". The "victory" went to their heads. The next two months were hell for the staff members. Students were so indisciplined as to threaten female staff members and verbally abuse them. Many staff quit in disgust.
Late September/Early October 2008. With a new Principal at the helm, the staff low on morale, things seemed to be taking a turn for the worse, when God intervened. A petty squabble amongst the students turned serious with two groups of students assaulting each other with iron rods and wooden sticks. Many students sustained injuries, with two being admitted to the Intensive Care Unit. The Police were called in to restore order. They also arrested a few students. Later on an discipline committee was formed with the Principal as its head. The committee shortlisted the names of students who had indulged in the melee. At this dramatic turn of events, the so called unity of the students cracked and then crumbled. It was like "watching the Boulder Dam give way" (Forsyth, Frederick. "The Afghan") Students called for enquiry confessed every misdemeanor they had committed. I think that some of them even confessed the misdemeanors of their past life.
Present Time, 2008. With strict control measures in place, and the screws still tightening, the student populace is now regretting its prior high handedness. With exams round the corner and the staff declining to help, they are running from pillar to post in search of salvation. Amidst this running around, a student found the time to tell his friend, "as we sow, so we shall reap. We kicked the earlier Principal out. Now we are being kicked around." Which I happened to overhear and have written it here.
We sent a Person Who was preaching love and peace to the cross. We shot a person who preached non-violence. Now we are reaping the deadly harvest. As we sow, so we shall reap.
Posted by Lord Voldemort's Musings... at 10:11 AM